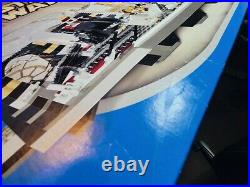 Look carefully at the photos, I include plenty of photos to see the condition of the set. You can see that the original Lego seals are there and they are intact. The box has wear for its age, please look at all photos. This comes from a smoke and pet dander free home. Below is the general description of the set. If you are a fan of rare collector's sets and George Lucas films, look no further than the LEGO Star Wars Cloud City. Recommended for ages 9 and up, LEGO Cloud City set allows adults and children alike to experience the joy of recreating the most awe-inspiring scenes from Star Wars: Episode V - The Empire Strikes Back. This fantastically detailed set includes 698 individual bricks and seven highly detailed minifigures. Just imagine that our heroes have traveled to Cloud City. Once there, Han Solo and Princess Leia discover that they have walked into an Imperial trap.

This means that Luke Skywalker must face the menacing and powerful Darth Vader to save his friends and the universe. With the Cloudy City LEGO set, the possibilities for imaginative play are endless. Enjoy the wonder of one of the most famous locations in the classic Star Wars trilogy. This 2003 LEGO Cloud City set includes minifigures representing characters from the movie. Luke Skywalker wields his green lightsaber.

Darth Vader has an interchangeable head, allowing you to customize his appearance according to the scene you are acting out. Princess Leia has her hair drawn up in a single bun.

Han Solo is decked out in the black vest and brown pants we saw in Episode IV. Boba Fett is clad in green armor and carries his blaster. Lando Calrissian, the unforgettable, charming scoundrel, wears a bright blue shirt with a dual-toned cape that is yellow on the inside and light blue on the outside. The set also includes a Stormtrooper minifigure and blaster.

With hundreds of pieces to assemble, this epic LEGO Star Wars play set becomes a panorama that extends more than 25 inches in width. The kit, complete with instructions, allows you to reenact and even rewrite pivotal scenes in the series. The instructions are detailed but easy to follow. Each section of the set comes with a numbered bag to keep the pieces organized. It can be the source of a lot of fun for the whole family and a great bonding experience.

There are a lot of amazing details featured on the completed Cloud City model. The fully assembled set includes a window catapult to launch characters. A sliding door and landing pad may also be used for the Twin Cloud Car. There is a carbon freezing chamber in which you may drop the Han Solo minifigure down.

He comes back up as his carbonite version. Once all of the bricks are in place, the expansive set offers four distinct areas where characters act out the plot. Our heroes can come through the Cloud City main gates and convene in the dining room, where Han and Princess Leia learn their mistake. Han is temporarily destined for the carbonation chamber.

Luke and Darth Vader will battle in the viaduct. Our heroes will come out victorious.

The possibilities for play with these LEGO brick toys are endless. The item "NIB Lego #10123 Star Wars Cloud City.

Sealed, Slight Wear to Box" is in sale since Monday, May 3, 2021. This item is in the category "Toys & Hobbies\Building Toys\LEGO Building Toys\LEGO Complete Sets & Packs". The seller is "djjodan" and is located in Aliquippa, Pennsylvania.