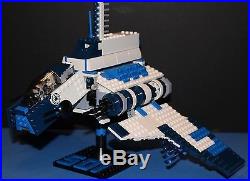 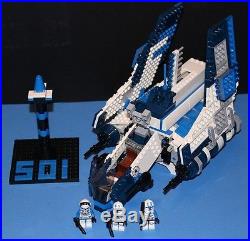 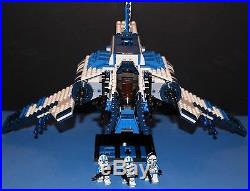 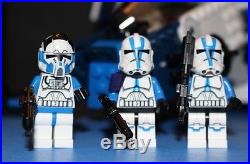 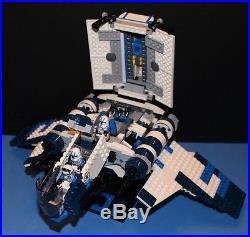 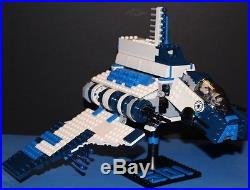 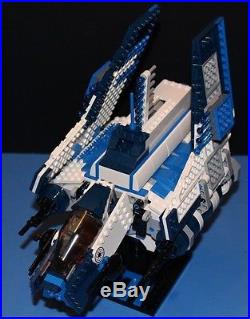 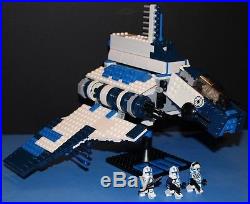 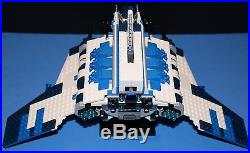 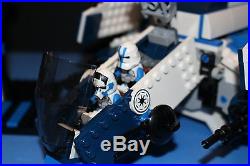 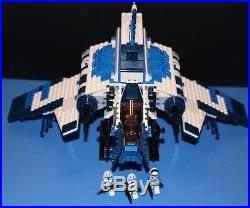 Please note that Joe's Custom Creations is a custom plastic building brick, set, and minifigure shop that is not affiliated with the LEGO group. After viewing this listing come and check out the store, new items are added on a regular basis! This listing is for Joes Newest customized version of the model 8019 Republic Attack Shuttle. A BLUE 501st Legion REPUBLIC ATTACK SHUTTLE! Phase II - Clone Crew Edition (with rounded crest on helmets & factory highlights). Affectionately called 911 by its crew because it comes in handy in any emergency! Features New Firing Missiles under wings for added playtime fun! Also includes custom "501" Stand for display and a Minifigure Crew of 3! Instructions included on CD-R picture disc for step by step construction. Made from 100% NEW - never used - factory LEGO bricks. This is a time of great uncertainty for the Galactic Republic. The Separatists are building a coalition of thousands of star systems. The Republic must stop the spread of lawlessness and disorder no matter where it goes! Characterized by the Blue markings on their armor & ships, the Republic's 501st legion is the Planet Coruscant's Elite Legion. All of its members have distinguished themselves in the Clone Wars and have been brought together personally by the Emperor.

This set is Modeled on the LEGO set 8019 Republic Attack Shuttle - with special custom modifications like the wing mounted missiles that really fire - a great interactive feature! Plus a custom display stand so your model will look on the shelf like it is really flying with its wings in flight mode. Includes Instructions for building this fantastic set on CD-R, piece by piece!

See more details on instructions below. INCLUDES all 3 Figures shown in pictures: Three 501st Elite CLONE WARS TROOPERS including 1 Pilots, 1 Commander/Officer (with pauldron/shoulder armor), & 1 Trooper. (See below for more details on the figures). Each Clone comes with a special custom aftermarket blaster modeled on the original weapons used by the clones in the Clone Wars. These blasters are made with LEGO minifigures in mind by the custom blaster shop The Little Arms Shop of Holland.

INFORMATION ON THE DETAILING FOR THESE Troopers. This set includes 3 BRAND NEW factory minifigures that are in the pictures. The 501st officer has an additional pauldron that is an aftermarket cloth part, all helmets and torsos are factory detailed - figures are new / only sorted from new sets and saved for this model. The Clone Pilot comes factory new, this customized version of LEGO 501st clone pilot is modified with blue arms and hips and has factory markings on helmet and torsos.

Thats a Total of 3 figures - All figures are Brand NEW! Only handed for sorting and customizing. All figures are new - never played with. Please Note: all figures and parts shown in pictures will be included - the pictures are of my display model - your set will use Factory Lego parts that are new and have been sealed in polybags for the construction of this custom set. This one of a kind set was created using 100% LEGO Bricks, painstakingly collected. The model is 95% faithful to the original 8019 Republic Attack Shuttle design. INSTRUCTIONS: A customized step by step set of jpg. Picture instructions on CD-R created from scratch will be used to painstakingly take you through the creation process! The instructions will detail every piece, color change, and customization STEP by STEP and will allow you to create this Masterpiece as well! Additional customization will be clearly explained as well. Continue the Star Wars saga, Crush the Separatists! With this 501st Attack Shuttle, no enemy force on the ground stands a chance! ALL BUYERS MUST PAY USING. · We do not mark merchandise values below value or mark items as "gifts" - US and International government regulations prohibit such actions. The item "LEGO brick STAR WARS Custom 8019 set 501st BLUE REPUBLIC ATTACK SHUTTLE +figs" is in sale since Monday, January 5, 2015. This item is in the category "Toys & Hobbies\Building Toys\LEGO Building Toys\LEGO Complete Sets & Packs". The seller is "jaf1970" and is located in Conesus, New York. This item can be shipped worldwide.