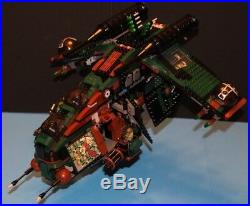 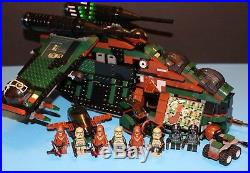 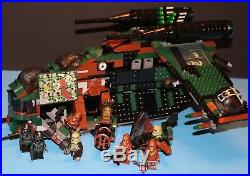 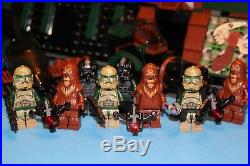 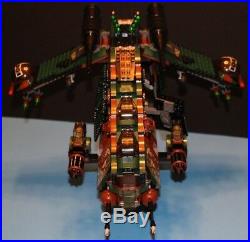 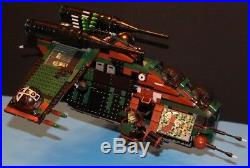 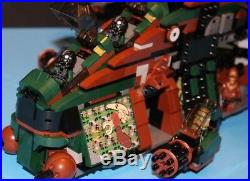 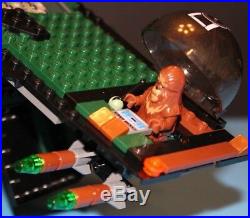 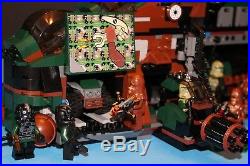 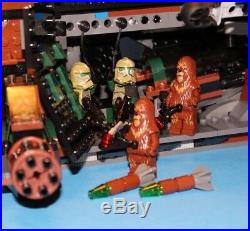 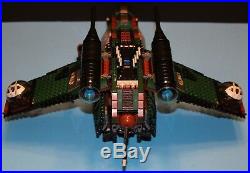 Welcome to Joe's Custom Creations! This is a unique store that offers many great hard to find or out of production factory LEGO® STAR WARS figures, sets, and accessories! Joe's Store specializes in custom LEGO brick creations such as the set in this listing as well as custom aftermarket accessories and hand detailed minifigures. Please note that Joe's Custom Creations is a custom plastic building brick, set, and minifigure shop that is not affiliated with the LEGO group.

After viewing this listing come and check out the store, new items are added on a regular basis! This listing is for one of Joes newest customized versions of the model 7676 Gunship. By its crew because once it starts blasting it rains and pours destruction!

All LEGO bricks are original factory LEGO brick colors new / never used only display model shown your model has never been built & will arrive unassembled with pieces sealed in numbered polybags - just like a factory set! Made from 100% NEW - never used - Official factory LEGO bricks. Includes a crew of 8 Official LEGO Minifigures! 2 Pilots, 3 Wookiee Warriors and 3 Kashyyyk Troopers outfitted as two troopers and one commander. This is a time of great uncertainty for the Republic.

The Rebublic stands for law and order, but if this Clone War does not end soon, lawlessness and disorder will rule the galaxy! Characterized by its camouflage colors of dark green, olive green, brown, and black, the Republic's Jungle legion is ready to be stationed wherever it is needed. This legion is made up of clones specially trained to handle extreme combat and fast insertions to hot landing zones!

Includes Instructions for building this fantastic set, piece by piece on CD-R! This special set features many innovative special modifications to the original factory 7676 design including two side mounted swiveling Gatling Guns! These two side mounted Gatling Guns or "Mini Guns" swivel, pivot, and rotate to give your troopers complete air to ground firepower superiority! They also hold a Clone Gunner for Precision marksmanship. Even the canopy opens for the figure to be inserted in and out.

These Gatling Guns are specially created to give this Kashyyyk Jungle Gunship even more firepower! Each side mounted Gatling Gun comes with a place for one trooper to sit and operate the gun, plus a canopy that opens!

They can be rotated to fire forward by "pilot remote" or using a gunner to shoot from the sides. They can be swiveled in just about any position. The six barrels of the Gatling Guns themselves even rotate to provide authentic realism! This is the most playable customized gunship Joe's Custom Creations has developed yet! But wait there is MORE!

Each wing of this Gunship holds two detachable missiles and a real shooting. Cannon mounted under the wings that really fires.

Truly an interactive feature that is sure to give hours of fun target shooting at your separatist ground forces. Affectionately called "the Mosquito" by its crew, this mini escape pod is equipped with a canopy that opens, seat for one clone, blaster cannons for close air support, and even folding wings so it can fit in the cargo hold of the gunship (see pictures). Applied to large parts of the gunship like the original factory versions add to the visual affects of this unique model. Gunship a unique and one of kind creation that has great interactive features even better than the original. Please Note: Not all original parts for the factory 7676 Gunship are included, only parts shown.

This one of a kind masterpiece was created using 100% LEGO Bricks, painstakingly collected. The model is 90% faithful to the original 7676 Republic Gunship design. Many steps were changed to allow for the special design of the Gatling Guns, other vehicles, missiles and cannons, change of color. A customized step by step set of jpg. Picture instructions on cd-r created from scratch will be used to painstakingly take you through the creation process!

The instructions will detail every piece, color change, and customization STEP by STEP and will allow you to create this Masterpiece as well! Additional customizations will be clearly explained as well. Only the Custom STICKERS for the gunship shown are included in this set, stickers will be applied unless otherwise requested. Continue the Star Wars saga, Crush the Separatists! With this Kashyyyk Jungle Gunship, no enemy force on the ground stands a chance! ALL BUYERS MUST PAY USING. · We do not mark merchandise values below value or mark items as "gifts" - US and International government regulations prohibit such actions. The item "LEGO brick STAR WARS Custom 7676 KASHYYYK JUNGLE GUNSHIP + 8 Minifigure Crew" is in sale since Saturday, May 9, 2020. This item is in the category "Toys & Hobbies\Building Toys\LEGO Building Toys\LEGO Complete Sets & Packs". The seller is "jaf1970" and is located in Conesus, New York.