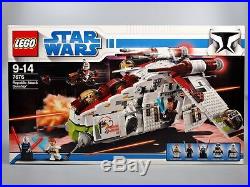 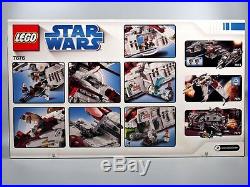 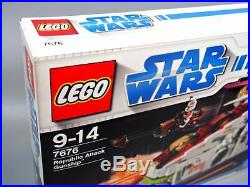 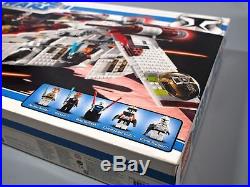 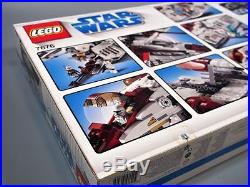 Welcome to Le it Go! We are the specialists in vintage and.

You are looking at a set of brand new. LEGO (7676) Star Wars Republic Attack Gunship.

It is NISB, New in (factory sealed) Box. Seals are still intact, NEVER Opened! See pictures, we do not use catalog photos. The item in the picture is the actual item you will receive.

7676 Republic Attack Gunship was released on July 26, 2008, as part of the LEGO Star Wars: The Clone Wars line. This set consists of 1,034 pieces used to build the Gunship itself, the small Speeder Bike, or the 74-Z Speeder, a small, removable Command Center (similar to the one released in the new 2010 Clone Turbo Tank), Bacta Tank, and spy droids. There was an earlier version of the gunship released, 7163 Republic Gunship, released in 2002 under the Star Wars Episode II: Attack of the Clones line. Included are Obi-Wan Kenobi (Clone Wars), Plo Koon, Asajj Ventress, Commander Cody, and Clone Trooper minifigures.

Take the battle to the Separatists with the Republic Attack Gunship! This heavily armed and armored Clone Wars troop carrier can fly and land on any battlefield or hostile terrain. Features include opening troop bay doors, removable command station, and healing chamber, positionable cannons, spy droids, flick missiles, a speeder bike that deploys from the back, and multiple decals to create different gunships for your army. But will even Obi-Wan Kenobi and Plo Koon be enough to stop the sinister Asajj Ventress and her double Sith lightsabers?

The 2 cockpits in front and the 2 on the wings open! Features 8 positionable flick-fire missiles on top and 2 rotating missiles in front!

Back hatch opens to deploy the speeder bike! Open the compartment on top to access the spy droids! Measures 14" (36cm) long, 17" (43cm) wide and 7 (18cm) high! This Lego set is our personal collection.

The photos are showing the actual Lego set. We provide the highest degree of care toward our Lego set. However, some of the Lego sets have been released for more than 5 years & heavy in weight. You may expect minor wear for the exterior of the Lego Box. We tried out best to disclose the actual condition of the set that you are going to receive.

We will try to locate the Lego set for you at attractable price. For tracking inquiry, please refer to. All of the Lego sets come from pet-free and non-smoking home. Feel free to contact me if you have any questions. Payments are due within 3 days of purchasing an item. The item "LEGO 7676 Star Wars Republic Attack Gunship NEW & SEALED" is in sale since Friday, November 13, 2015. This item is in the category "Toys & Hobbies\Building Toys\LEGO Building Toys\LEGO Complete Sets & Packs". The seller is "hchan589" and is located in Hong Kong. This item can be shipped worldwide.