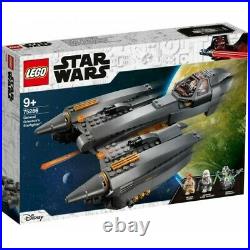 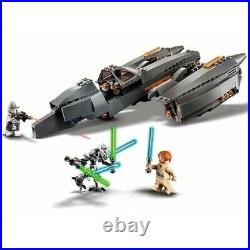 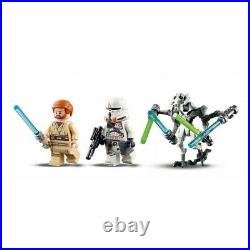 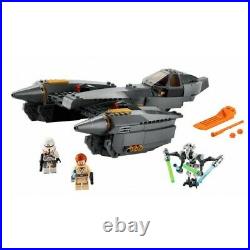 Open up a galaxy of creative play adventures with this awesome LEGO® Star Wars spacecraft building toy for kids: General Grievouss Starfighter (75286)! Fans will love the authentic, play-inspiring features such as the opening cockpit, spring-loaded shooters and retractable landing gear. Obi-Wan This building set comes with 3 LEGO® minifigures General Grievous, Obi-Wan Kenobi and an Airborne Clone Trooper with weapons for youngsters to role-play classic action battles from Star Wars : Revenge of the Sith or create their own original stories. A super gift idea for any young Star Wars fan, this building kit is great for solo or group play and makes a fine addition to any LEGO collection. Star Wars action in LEGO style! The LEGO Group has been creating brick-built versions of iconic Star Wars starfighters, vehicles, locations and characters since 1999. It's become a hugely successful theme with a fantastic variety of fun construction toys to thrill fans of all ages. Kids can stage epic General Grievous vs. Obi-Wan Kenobi battles with this construction playset featuring General Grievouss Starfighter (75286) from Star Wars : Revenge of the Sith. This awesome building toy for kids includes 3 LEGO® Star Wars minifigures General Grievous, Obi-Wan Kenobi with a Lightsaber, and an Airborne Clone Trooper with a blaster to role-play fun, creative stories.

General Grievous's Starfighter features an opening LEGO® minifigure cockpit, 2 spring-loaded shooters and retractable landing gear to spark fans imaginations as they play solo or share the fun with friends. There are lots of ways to play with this 487-piece set, making it a great birthday present or holiday gift for boys and girls aged 9+ to introduce them to LEGO® Star Wars building toys or expand their collection. This construction model measures over 3 (8cm) high, 11.5 (30cm) long and 6.5 (17cm) wide.

Fans can also fly it in the LEGO® Star Wars : The Skywalker Saga video game. This popular LEGO® Star Wars spacecraft building toy is powered by kids imaginations, so they can use the starfighter and LEGO minifigures to play out the best galactic adventures. It comes with illustrated, step-by-step instructions so they can build independently and feel Jedi-level awesome! There are LEGO® Star Wars sets to delight fans of any age, whether they want to recreate classic action from the saga, role-play their own stories or simply build and display the spectacular construction models.

Ever since 1958, LEGO® bricks have met the highest industry standards, which ensures they are consistent and connect and pull apart easily every time no need to use the Force! LEGO® bricks and pieces are tested in almost every way imaginable so you can be sure that this Star Wars : Revenge of the Sith building set meets the highest safety standards here on planet Earth and in galaxies far, far away!

The item "LEGO (75286) STAR WARS GENERAL GRIEVOUSS STARFIGHTER (Brand New in Box)" is in sale since Saturday, August 15, 2020. This item is in the category "Toys, Hobbies\Building Toys\LEGO Building Toys\LEGO Complete Sets & Packs". The seller is "frenlybrickstore" and is located in Burleigh Waters, QLD. This item can be shipped worldwide.