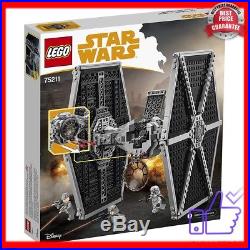 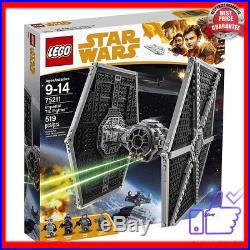 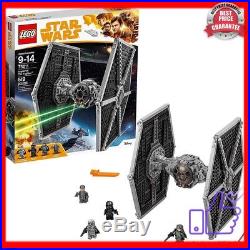 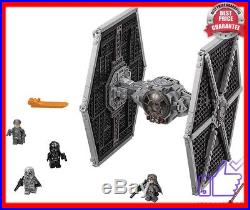 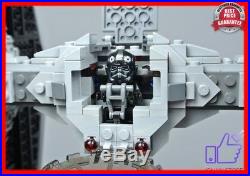 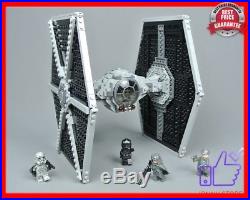 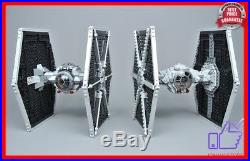 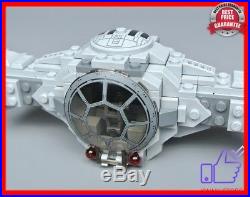 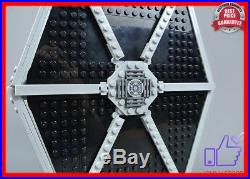 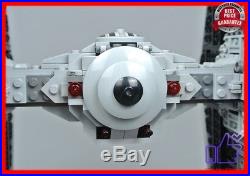 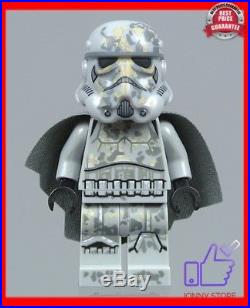 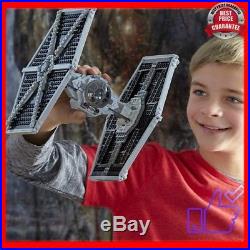 Measures over 9 (23cm) high, 7 (20cm) long and 7 (19cm) wide. Review: 75211 Imperial TIE Fighter. Six years have passed since LEGO last released a minifigure-scale rendition of the standard TIE/ln Fighter and 75211 Imperial TIE Fighter definitely seems to improve upon its predecessor, making use of several pieces that have been introduced since 2012 and are ideally suited to the vehicle.

I have therefore been looking forward to this set very much, all four minifigures look fantastic and I will be impressed if this set can match, or even surpass, the high quality of 2015's 75101 First Order Special Forces TIE Fighter, a Sequel Trilogy variant of the infamous Imperial craft. Han Solo appears in three sets based upon Solo: A Star Wars Story, wearing different attire on each occasion. This version is dressed as an Imperial Mudtrooper so sports a new dark bluish grey helmet with a moulded strap and goggles on the front. It looks marvellous in relation to the movie and I like the unique cape worn around Han's neck which features a printed hood and some creasing. His head, on the other hand, includes the standard smiling and angry expressions which both look pretty good.

Mudtrooper breastplates resemble those worn by Imperial Snowtroopers on Hoth but is predominantly grey rather than white. Tobias Beckett wears similar armour, although his features an officer's rank insignia plaque as well as some dark tan mud and is partially covered by a dark bluish grey trench coat. The minifigure wears an officer's cap with a silver identity disc on the crown and his head includes an untidy beard, some wrinkles and a fairly plain facial expression. Hopefully this character will appear in future Solo: A Star Wars Story sets with a new double-sided head as this one conveys little emotion. Beckett comes with two pearl silver blaster pistols while Han is equipped with a large rifle.

LEGO seems to revise the Imperial Pilot minifigure every year and this example continues that trend, wearing an updated helmet which includes more printed detail than ever before. The Imperial insignia look great and I love the metallic silver design on the ridge down the centre of the helmet, although it has not been printed perfectly on my minifigure which is rather disappointing. The lift-support pack fixed to the pilot's chest is very nicely detailed, featuring some colourful buttons as well as two gas transfer tubes that line up with the hoses on the helmet.

I like the figure's metallic silver belt buckle and the design on his legs looks good too, having appeared in many previous sets. A standard Clone Trooper head is found beneath the helmet and the pilot carries a black blaster pistol for use on the ground. Imperial forces can be adapted to suit many different environments and the Mimban Stormtrooper is one such soldier, wearing light bluish grey armour that is decorated with a muddy camouflage pattern. This is an attractive design and seems entirely appropriate for the swampy world of Mimban, although the arms and the back of the helmet looks quite plain compared with such intricate camouflage across the rest of the figure. The shape of this trooper's helmet appears identical to that of a standard Imperial Stormtrooper at first glance.

In fact, it features much thicker armour across the forehead, perhaps housing additional sensor equipment for navigating the mists of Mimban. Like Han Solo, the Mimban Stormtrooper wears a lovely dark bluish grey cape and wields a blaster rifle. 9492 TIE Fighter was released in 2012 and represented a vast improvement over earlier renditions of the craft, defining both the scale of today's model and many of its most notable design features.

75211 Imperial TIE Fighter measures 23cm in height so looks absolutely perfect in relation to a minifigure and its proportions are accurate to the source material as well, closely following the excellent example set by 9492 TIE Fighter. However, comparing this set with its immediate predecessor reveals several significant improvements. The strengthening of the connection between the narrow support pylons and the wings is probably the most important of these, allowing you to fly the model around with absolute confidence that the solar collection panels will not wobble or fall off entirely. The shape of the cockpit has also been altered, reflecting the introduction of a new canopy element in 2015 that was designed specifically for TIE-series vehicles. That canopy includes greater printed detail than ever before and I think the combination of slopes that form the cockpit are effective on the whole, despite the inevitable challenges presented by assembling a sphere using LEGO pieces. The pentagonal 2x2 plates on either side of the viewport are especially impressive. They were initially created for the Minecraft track system but are new in light bluish grey and they look superb here. The access hatch on top of the TIE Fighter and the trans-black viewport on the front are both mounted on hinges so you can open them to reveal a seat for the pilot inside. There are no studs for attaching a minifigure which would typically be an issue but the control yoke in the front of the pilot keeps him quite secure on this occasion. Furthermore, two clips are included beside the pilot so there is room to store accessories during flight. A series of concentric dishes form the rear of the cockpit.

These look reasonably good in relation to the film but would have been even better with a hexagonal viewport, sometimes identified as a solar ionisation reactor, at the centre rather than a round one. I like the twin trans-red thrusters though and a pair of spring-loaded shooters are hidden very neatly beneath the cockpit.

You can launch the missiles individually by pressing on their tails. Each solar array panel is connected to its stanchion via four clips, much like the wings on both 75095 TIE Fighter and 75101 First Order Special Forces TIE Fighter from 2015.

These are nestled inside the wing superstructure so there is little risk of breakage and I think the integration between the support pylons and the wings looks brilliant. Unfortunately, wing braces are absent from the inward-facing collection surface and the dark bluish grey plates seem out of place to me so I would recommend replacing them with black ones.

The exterior of the solar array panels look wonderful though, featuring six angled braces and a light bluish grey frame that runs around the edge of the wing. The resultant structure is remarkably sturdy and its shape matches the movie exactly. I appreciate the clear contrast between exposed studs and smooth tiles on the solar collection surface but would have preferred all six support struts to feature the same texture.

Hexagonal converter core housings are situated at the centre of each wing. The mechanical detailing here is relatively simple, consisting of some dark bluish grey grilles and a printed 2x2 round tile. There are no stickers in this set but it does include a total of five light bluish grey roller skates which are new in this colour and could prove to be extremely useful. Our stock all ships from our US-based warehouses.

We stand behind our products. We do our best to process as quickly as possible. The item "Brand new LEGO Star Wars Imperial TIE Fighter 75211 Building Kit factory sealed" is in sale since Friday, August 3, 2018. This item is in the category "Toys & Hobbies\Building Toys\LEGO Building Toys\LEGO Complete Sets & Packs".

The seller is "jonny_store" and is located in San Jose, CA. This item can be shipped to United States.